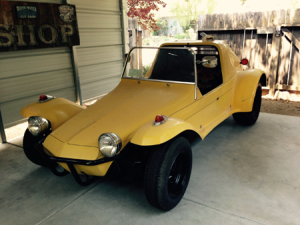 This is my latest purchase, a Corsair Stripper Dune Buggy, that was built in the 1970s in Southern Cal by Chuck Beck. It is one of about 160 that were built with a custom tube frame with a removable fiberglass body. It has early 1970s VW Bettle running gear which is very easy to work on. I am refurbishing it and will be towing it behind my motor home. It is street legal with lights, turn signals, wind shield wipers,horn, parking brake, seat belts, etc.

I talked to Chuck Beck on the phone recently. He spent time with me which  was really appreciated. This was his first project, designing and producing a custom car with a VW Bettle don

er car. He said he made about 160 of them in the early l980s. He said he is mainly a designer and had the custom tube frames made by a shop that built race car frames in Southern Cal. He also found Wayne Jacobs Fiberglass in San Diego to make the bodies, which was the cutting edge of high quality, hand laid fiberglass at that time. Chuck said they only built one car up for testing, promo and display and then sold the rest as kits. Chuck went on to design and build the famous Beck Porsche 550 Spyder kit car which is the bench mark for quality in fiberglass replica kit cars today.

Article on the Stripper

Some of the greatest vintage road racing ever.