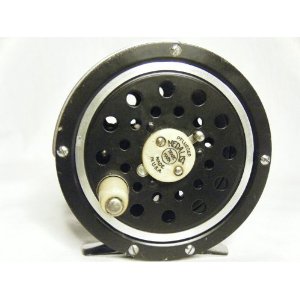 I sold and used the old Pflueger ‘Medalist’ fly reels for over 40 years now. Actually we don’t sell them anymore but you can get very nice old ones on eBay, fly fishing classifieds and at garage sales. At one time they were the standard fly reel for most fly fishers in the USA.

My first new ones were bought locally around Sacramento, California in the 1960s. I think I bought a new ’1494′ from Thrifty’s Drug in south Sacramento for $14.88. It was set up for left hand crank and had a plastic drag disc and I think 6 rivets holding the three peice spool together. I converted it to right hand crank because I thought it felt better. This was put on a new Fenwich FF805 2 piece fiberglass fly rod for trout.

We use some big 1498 models for holding demo lines for large saltwater fly rods and Spey rods.

These are the models I am familiar with:

The older ones had 6 rivets holding the spool together. The later models after about 1960 had 3 rivets.

The first models were click drag only in the 1930s. Then in the 1940s they went to the adjustable disc drag.

The real old ones had a machined steel drag disc inside. Old ones had metal drag knobs and metal caps on the center of the spool where the latch was. The frame pillars were actually not removable on the ones made before 1940.

For years I sold ($20.00) machined naval bronze reversible drag disc that I bought from Herman Voss of Pompano Beach, Florida.

I have a one piece machined solid aluminum spool for a Pflueger ’Medalist’ 1492 1/2 that was made by Herman Voss. I got it from Chico Fernandez.

We also had Hardy nickel silver counter balances we installed in the Medalist in the 70s and 80s so we could go for Steelhead and Bonefish with them.

In the ’80s Pflueger went to metric screws. I called Shakespeare who bought the company and they said we did not need those SAE frame screws anymore. That really  pissed me off. Today we really don’t need many of the screws but I think you can get them from One Pfoot.

The Medalists are all but gone from the scene today. We only see a few every season now. I still like to fish with some of my old ones.

Years ago I use to install dozens of screws in them every summer for customers. They would vibrate out. We put head cement on the screw heads to keep them from coming loose and falling out. Today we would use Loctite to hold them in.

I have a collection of old Medalists that are just for memories now.

With the same reel I was ‘spooled’ (~150 yard of backing to the end) wading at Christmas Island by a rather large Bonefish in 1986.

I caught big Steelhead with it on the Dean River in British Columbia in 1983.

I caught big Rainbows in New Zealand with it in the late 1980s.

They used them at the Fenwick Fly Fishing schools in the 60s/70s so many of them are still around. Mel Krieger and many of his friends have them still. They called me years back for the Voss brass drag disc and Hardy counter balances.

**They made the Pflueger ‘Supreme’ anti-reverse big game models in two sizes too with a solid machined aluminum spool and disc drag.

I am sure I could clean and lube mine up that are here on the shelf and go catch anything on them.

Bill Archuleta has the number one fly reel parts and repair business in the world. Call or email Bill for any help you need with any older fly reels. Bill’s specialty is old Hardy fly reels made in England but I believe he will work on most anything.

The One-Pfoot Company has lots of good after market parts for Pflueger Medalists.

Feel free to contact me for any help as well. 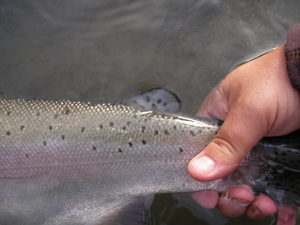 by Bill Kiene On our Nor Cal valley rivers in the winter we have cold water, mostly hatchery fish (but not all) […] 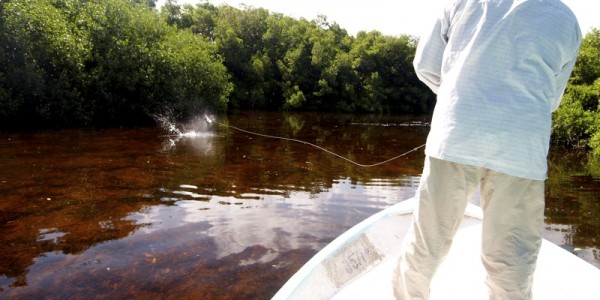